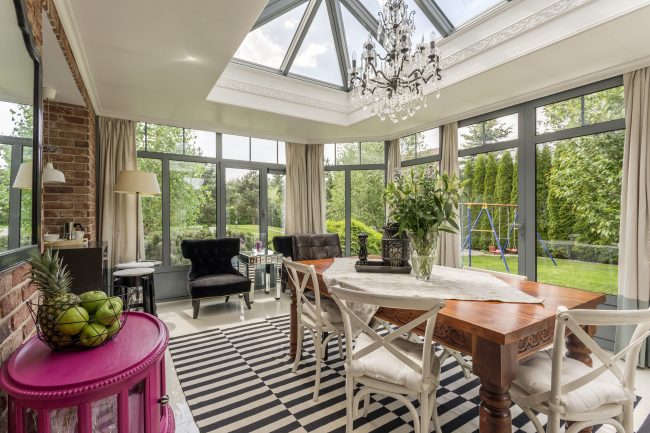 Knowing how much you will need to save every month will help you to reach your goal faster and ultimately lead you to having an exciting new addition to your home.

In order to know the rough price of your conservatory, it helps to know what style you want.

The styles of conservatory vary quite substantially, and some of this will be down to periodic differences and also how they make the use of space.

The best way to save for any kind of asset or extension is to know the price you can expect to pay beforehand.

By far, the most expensive style of conservatory in the UK is an orangery. These are based on Renaissance greenhouses which would, as you might have guessed, grow oranges and fruit trees.

They are partly made from brickwork, which gives them a much more sturdy and grandiose appearance.

These are certainly more pricey, but they blur the line between conservatory and extension more than the other options, due to the amount of brickwork involved.

Smaller properties will probably benefit the most from a lean-to conservatory, as it takes up comparatively little space in your garden.

Lean-to conservatories are relatively self-explanatory in that they are composed of four glass walls and a roof that leans up against the main building.

They are ideal for a small reading room or maybe even a social space (dining room or lounge) if you have room to do so.

These are some of the most commonly advertised styles of conservatory as their roof and curved walls are instantly recognisable.

These are ideal for those that are interested in getting as much light into the conservatory as possible. They are very spacious, and can easily be used to hold social gatherings or be used as a quasi-extension.

The letter names (T, B and P) refer to the resemblance of the conservatory’s shape. So, for example, a P-shape conservatory would take the shape of a P by having a longer oblong room with a round end to it, which would look like a ‘P’ from an arial view.

If you don’t quite fancy the traditional appearance of the Victorian conservatory, and you don’t have the budget for a full orangery, then an Edwardian conservatory could be the ideal compromise.

These are rectangular in shape and have a brickwork base. The pointed glass roof makes them perfect for an elegant social space.

Which conservatory you ultimately opt for will depend on how much money you are prepared to save or part with. If you love the idea of an orangery, but don’t quite have the budget for it, then an Edwardian conservatory could be a very pleasing compromise.

If you want a Victorian style but with more space, then you may want to put a little more money aside for a P or B shape conservatory. Whatever you choose ensure you opt for Double Glazing, understand more about the benefits of double glazing & how it works here.